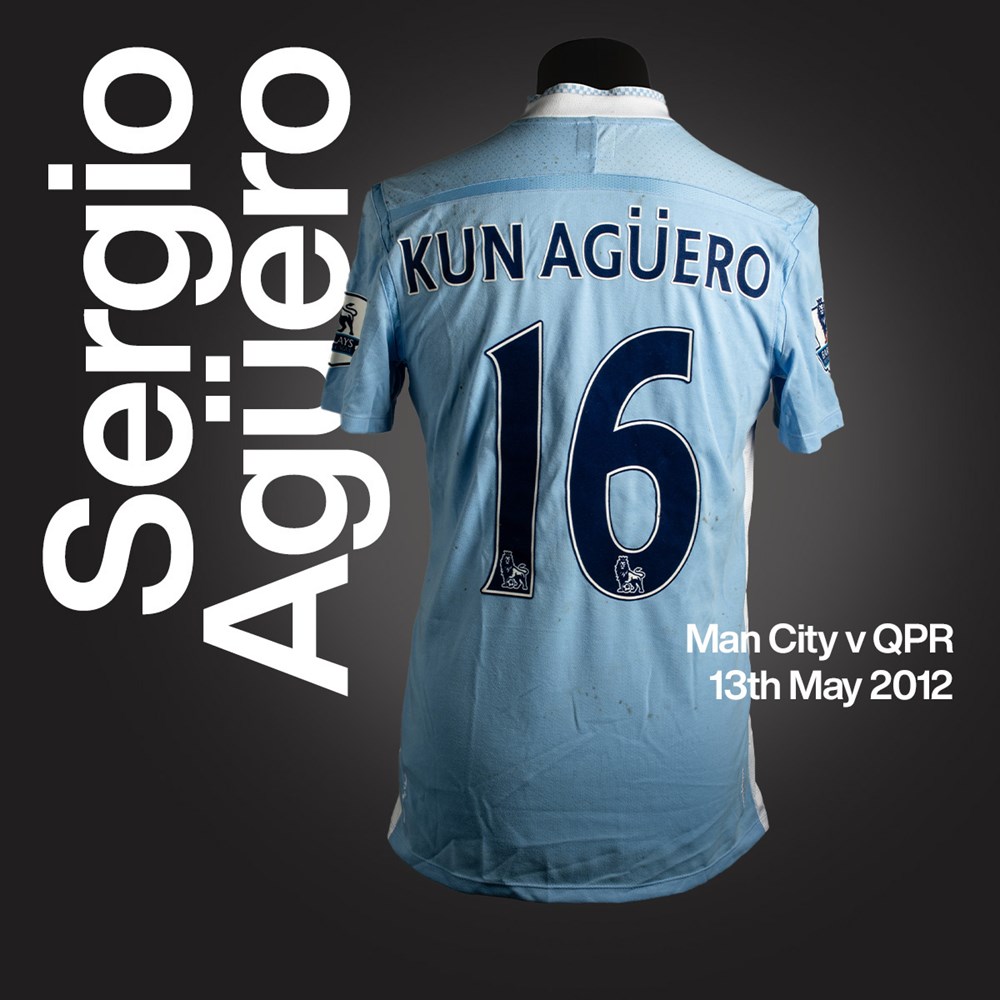 The historic blue Manchester City No.16 jersey worn by Sergio Agüero when scoring the winning goal v Queen's Park Rangers in the 4th minute of extra-time at the Etihad Stadium in 2012 will go up for auction as part of our '30 Years of the Premier League' sale on the 24th May 2022. Below is the letter of provenance from the consignor of the jersey, Neville Evans, the proprietor of the National Football Shirt Collection.

"My name is Neville Evans and I am the consignor of the above lot and this letter is to confirm the provenance of the Sergio Agüero shirt. I am the proprietor of the National Football Shirt Collection. Artefacts from the collection have been on display in museums and exhibitions around the globe on numerous occasions including regular use by UEFA and FIFA.

After the dramatic last gasp victory, the City players returned to the dressing room whilst the pitch was cleared of celebrating fans ahead of the trophy and medals presentation. Champagne bottles were opened and sprayed in traditional sporting celebration. The city players then changed into specially pre-prepared "Champions 12" commemorative shirts and returned to the pitch to lift the trophy and receive their medals.

Manchester City player Mario Balotelli had swapped shirts with the Queen's Park Rangers player Taye Taiwo, a jersey that is being offered as lot 286 in the auction. Also Balotelli's No.45 playing shorts and Champions 12 shirt from the occasion are being offered as lot 285. Lots 284 to 286 have all been consigned to the auction by myself. When the team returned to the dressing room after the ceremony Balotelli asked Sergio Agüero for his shirt as a souvenir.

Having secured the shirt and put it into his kit bag together with his Champions 12 shirt, the QPR shirt and the playing shorts, Balotelli then left the stadium without his bag! The bag was discovered by a member of Manchester City staff (no longer at the Club) the following day and transferred to the club's training ground. The bag remained there for a period of time but it was never claimed. At this point, the member of Manchester City staff gifted the contents to the National Football Shirt Collection via my curator.

I never had any intention to sell the Agüero shirt until I heard of the Premier League 30th Anniversary auction being held at Graham Budd Auctions. I will not be profiting from the sale of the shirt whatsoever. The long-time curator of the National Football Shirt Collection is requiring ongoing critical medical care and the auction proceeds from lot 284 are being shared between him and two charities that he has supported and received support from through his illness: Testicular Cancer UK ("checkemlads") and the Stroke Association. When informed of this intention, Graham Budd Auctions kindly agreed to waive their seller's commission for the sale of the Agüero shirt.

This statement is based on the information I received from the member of Manchester City staff as a true and accurate account of the circumstances of this historic day at The Etihad Stadium. In a separately signed document to be offered to the winning bidder of lot 284, the aforementioned City staff member confirms the details as stated in my Letter of Provenance."